Leave your email and we will keep you updated. Be among the first ones to be notified when our Kickstarter campaign starts.

Players move around the city streets trying to acquire the right location and the right weapon to eliminate Johnny the Quick – the guy nobody in town likes!

Looks like a chase is about to start and it won’t be just any chase. It will be the Downtown Chase… 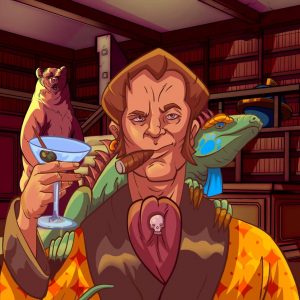 It is never a good time to doublecross an arms dealer, but if you must, make sure he finds out about that when you are on a plane to an island in the Pacific Ocean, not sooner. Shady Jim certainly didn’t get his nickname because he likes to rest in the shade…

„Gun control? Sure, I would definitely like to control all the guns. Looks like our Johnny doesn’t seem to understand that. Perhaps if I talk to him face to face? That is, after I hang his ugly mug on my wall!!!“ 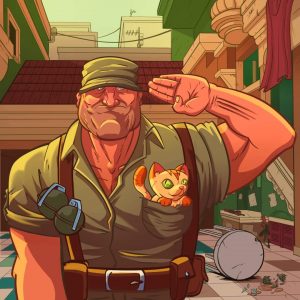 Having a girlfriend whose father is an ex-military is always risky. I mean, if they’re willing to fight for their country, can you imagine what they would do if someone tries to hurt their little girl? Well, you don’t have to imagine, just sit and watch.

„I am not a violent man, but this hurts more than a bullet in my rear, while hanging of a cliff, holding on to a branch…covered with thorns…over a fast river…full of crocodiles… Anyway, this gentleman will soon find out how it feels. Here, kitty, kitty…“ 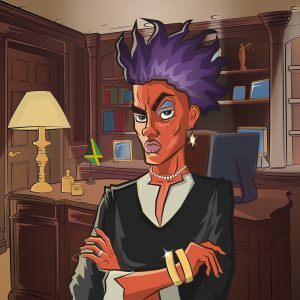 Having your back „watched“ by a member of justice system is always a good thing, especially if you don’t care about the justice that much. Innocent until proven guilty? It’s more like guilty until the Righteous Jenny says otherwise.

„There was a time when judges were treated with respect. People were friendly, polite and  most importantly, they paid in advance, in cash, no questions asked. It looks like today they all think they are right and justice is on their side. I think it’s time to show them they’re wrong!“ 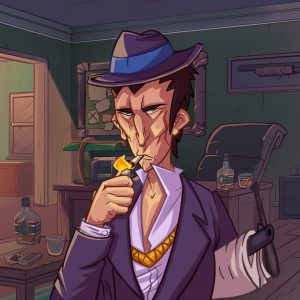 If someone “gives you a hand“ to get elected, you can’t pretend you don’t know him anymore. As a matter of fact, you become friends and that kind of friendship lasts forever, unless one friend gets angry and it’s usually the one who hasn’t got elected…

„These youngsters… They don’t know a thing… When you ask for a favor you have to return a favor. And return it again. And again. This pretty boy is about to learn a lesson and it ain’t gonna be a nice one!!!“

Do you like our crew? Aren’t they fun? If you are nodding, please leave your email…

Still no? That’s all right, take your time. Let’s learn a little bit about the game…

Please note that this in not the final artwork and design. This is a homemade prototype version of the game, just to show you what we are working on. Professionals are working on it as we speak, so don’t worry, everything will look much better!

How to Play the Game

Downtown Chase is played in rounds. The goal of the players is to eliminate Johnny the Quick, a slimy, corrupt politician. 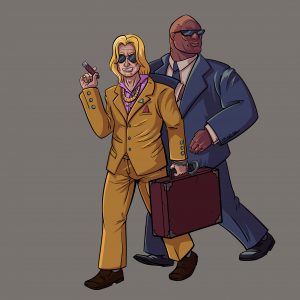 JTQ is not controlled by any player, it is the game itself. JTQ moves around the board using a combination of dice rolls.

The players draw cards from three decks, trying to acquire the right combination of location card and weapon card needed to attack Johnny the Quick. When they move to the right location and have the right weapon in their hands and they get close to JTQ, they can attack. 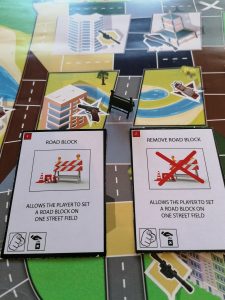 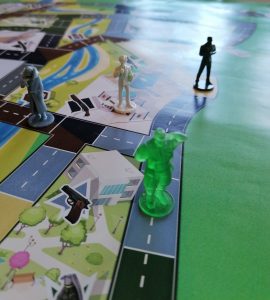 The attack is resolved on a separate board called The Assassination Chart, where the players try to eliminate JTQ using the weapon’s field of impact and dice roll. 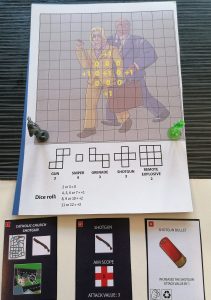 Apart from playing against the game, players also play against each other. That is why they draw cards from the third deck, with a lot of options allowing players to gain some advantages or create some disadvantages for the other players. 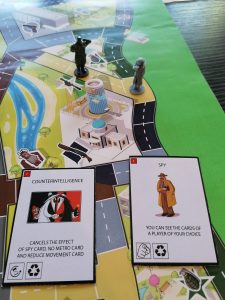 If two players find themselves on the same field, they enter the duel, which is a street fist fight. Each player has a particular set of skills which can be upgraded by drawing the right card from the decks.

The player who eliminates the JTQ wins the game. If JTQ is still alive after 12 rounds, victory points will decide the winner.